When I arrived in San Jose last night, the newspaper on the front desk at the hotel had this headline splashed across the front page: “Drones Putting Lives at Risk.” At least five times this year, fire departments trying to battle wildfires in California were unable to fly their helicopters close enough to assist teams on the ground because small drones flown by ordinary citizens were in the airspace capturing footage of the blaze.

This morning, at NASA’s UTM Convention, Amazon announced details of a plan designed to solve these kinds of problems. The company laid out its vision for a multi-tiered superhighway in the sky, one in which all drones flying above 200 feet would have the ability to communicate with — and ideally sense and avoid — other aircraft. It’s an attempt to put an end to the Wild West atmosphere that has been the norm for uncrewed aerial systems (UAS) over the last five years, replacing it with a next-generation air traffic control system. It hopes to establish a basic regulatory framework and set of technical standards that manufacturers can work toward. All this would prepare the airspace for a time when thousands, even tens of thousands of drones fly over the average city delivering parcels, monitoring air quality, and handing out parking tickets. 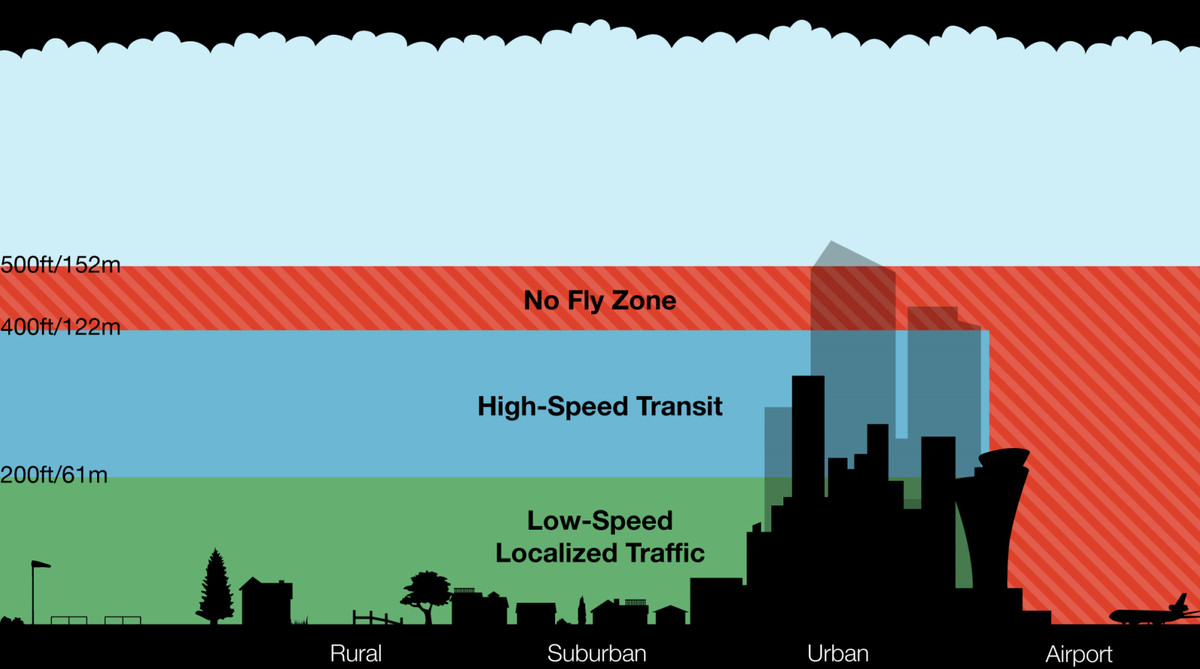 Amazon’s proposal, which is in line with similar ideas floated by NASA and Google, would create a slow lane for local traffic below 200 feet and a fast lane for long-distance transport between 200 and 400 feet. Altitudes between 400 and 500 feet would become a no-fly zone, and anything above that is already against FAA regulations for hobbyists. While some commercial drone operators are pushing to fly large UAS above 500 feet, Amazon is avoiding that discussion for now.

Commercial aircraft are governed by FAA’s Air Traffic Control, and in Amazon’s vision, there would be a similar central command and control network that takes in data about the position of each drone and shares it with every other vehicle connected to the network. There would also be vehicle-to-vehicle communication, similar to what we are starting to see with autonomous automobiles. Access to the different layers of the airspace would be governed by how well your drone can communicate with its pilot, the command and control network, and other drones. “Everyone can have access to the airspace,” says Gur Kimchi, who heads up Amazon’s Prime Air program. “It doesn’t matter if you’re a hobbyist or a corporation. If you’ve got the right equipment, you can fly.”

If you’re operating a radio-controlled quadcopter with no internet connection, then you would be relegated to the area below 200 feet. That may rub some hobbyists the wrong way, but given that even cheap consumer drones are now connected to the internet through their apps, it seems unlikely that there will be too many UAS which fall into this category. And while complex sense and avoid (SAA) technology is not yet widespread among consumer drones, we are already seeing it appear on units like the Lily, in software from Skydio, and in developer hardware like DJI’s Matrice. If the pace of development in this area continues, sense and avoid technology will be standard on consumer drones within a few years.

Still, startups working on consumer facing drones took issue with parts of of the plan. “Amazon’s proposal to create a commercial airspace dedicated to drones is smart thinking for the future of its business proposition,” said Antoine Level, CEO of Squadrone System, the company behind the HEXO+. “The uptake of drones means that regulation will need to change to adapt; however, given the utility of personal-use application of drones, regulation must be careful not to regulate commercial use in such a way that drones become too costly to deploy and inaccessible to consumers, as this will in turn create a bar to their usage and adoption.” 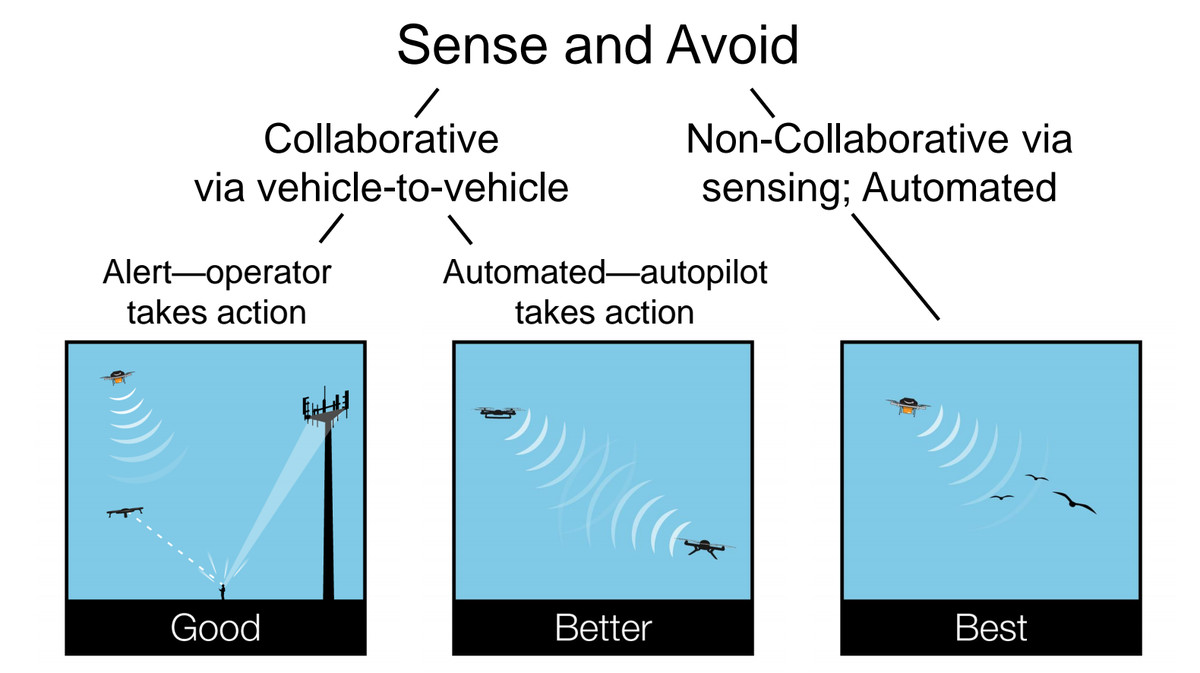 In traditional air traffic control, humans have handled much of the work. But with small UAS, the number of aircraft in the sky at any given time is likely to be many times greater than the number of commercial aircraft. So Amazon is proposing we let the machines handle more of the work themselves. “Right now the standard is an aircraft that can basically fly itself, with a human at the controls to take over at anytime,” says Kimchi. “But with UAS, there won’t be a single operator for every drone. We need a lot more automation than we have with the traditional model.”

Amazon says its drones would automatically adjust their path if they are on a collision course, and also warn one another about obstacles. “I am from Seattle, there are many seagulls,” Kimchi says. “Our drone would automatically get out of the way and also alert others in the area.” 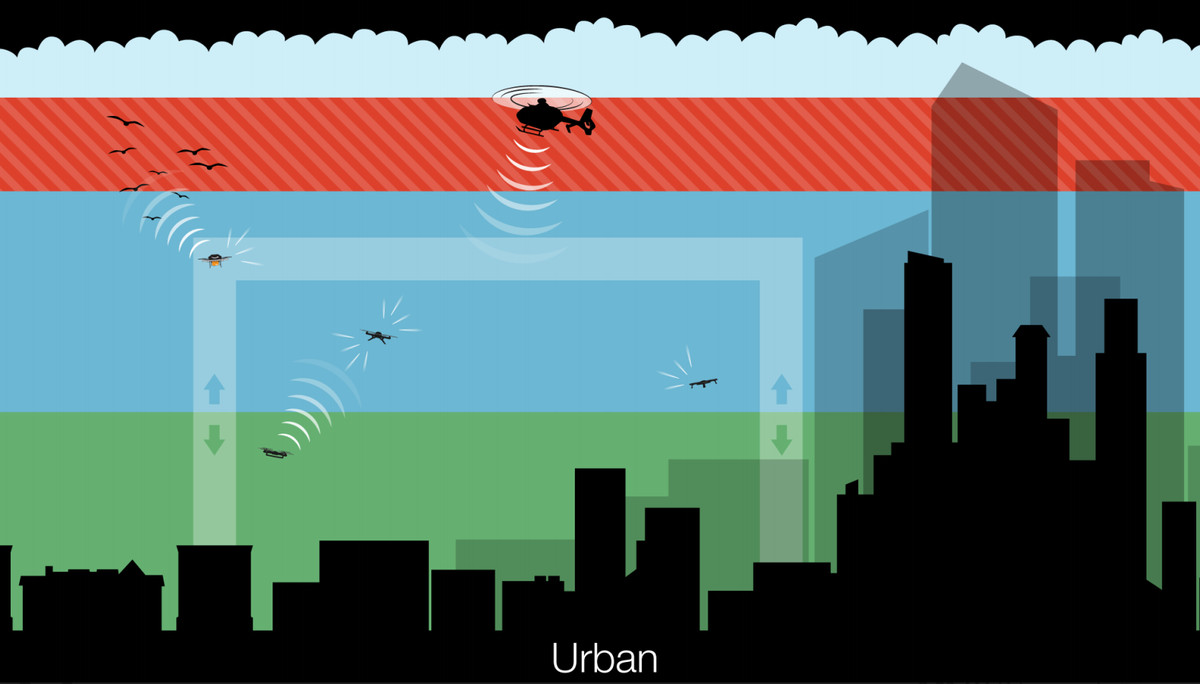 This new air traffic control system would also link UAS with traditional aircraft. If a helicopter from the fire department needed to fly low over an emergency, for example, it would be able to communicate with command and control, warning drones it was in the area, and creating a geofenced area around itself that would become a no-fly zone, as depicted in the graphic above.

There could be as many as 150,000 drone jobs in Europe by the year 2050, says a report out today from the EU Committee of Britain’s House of Lords. Those jobs include piloting as well as manufacturing and other support work. In the US, the drone industry has claimed there’ll be a similar bonanza. But there are a couple of catches.

First, people need to know how to fly them. In the UK, commercial drone pilots need a form of aviation license, and regulations ban them from being flown over built-up areas or crowds, or out of sight of the pilot. But the aviation industry is still worried. It has said that “leisure” users might at some point cause “a catastrophic accident,” which could damage the growth of the industry, the report says.

Then, there’s the problem of public perception. Drones clearly make people nervous, even though there’s a world of difference between the small commercial devices and the massive military drones that patrol the skies over war zones. The unexplained sighting of drones above Paris last week had a city that had recently experienced a terrorist atrocity immediately on edge.

While small drones are already increasingly used for filming and photography by journalists and movie-makers as well as enthusiasts, they also have less visible uses: farmers surveying their fields to plan crop rotation, estate agents taking aerial shots of houses, and infrastructure companies checking on cables and or bridges. All of these make privacy a particularly fraught issue. To deal with that, the report calls for pilots to be made aware of rules that protect ordinary people from having their private lives inspected or their data collected.

The Connectivity Lab at Facebook is developing ways to make affordable Internet access possible in communities around the world. The team is exploring a variety of technologies, including high-altitude long-endurance planes, satellites and lasers.
Hear from Mark Zuckerberg on the challenges and opportunities of a new generation of connectivity platforms. Read the paper
[youtube]http://youtu.be/EMwzdYN2v2U[/youtube]
See more @ internet.org

Airbus Defence and Space submitted a formal application for civil certification of its unmanned aerial vehicle, Atlante, to the European Aviation Safety Agency, the body responsible for certifying all aircraft in Europe.

The Atlante is a single-engine, propeller-powered UAV weighing over 1,200 pounds and has a wingspan of over 25 feet. It can take on a variety of commercial roles, including surveillance of oil pipelines, power lines, railways, natural disasters, forest fires or sporting events.

“UAVs represent a rapidly growing activity in commercial aviation that will have a very significant economic impact in the near future,” says Miguel Ángel Morell, head of engineering for military aircraft at Airbus. “The launch of the Atlante application will help EASA to secure a world-leading position in the establishment of the appropriate regulatory framework under which such systems will be designed, produced and maintained.”